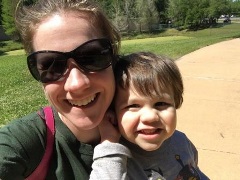 When it comes to birthday presents one thing is clear. Rachel of Macomb, Michigan gives real meaning to the ultimate gift for her son.

On June 15th, 2015, Rachel, a mother of two, donated her kidney to her son Eli on his second birthday.

Rachel explains that when she was pregnant, a routine ultrasound at a local hospital showed Eli may have problems with his bladder.

“The hope was that there was a blockage in his bladder and perhaps a minor procedure could eventually fix the condition,” she says.

Eli was diagnosed with posterior urethral valves, a condition which occurs only in boys. It is due to a blockage to the urine flow through the urethra that causes back pressure on the bladder, which may cause the bladder to enlarge and/or develop a very thick muscle wall. This can lead to further back pressure up the ureters and lead to excess fluid in the kidneys. Eli had underdeveloped kidneys and developed end stage kidney failure. 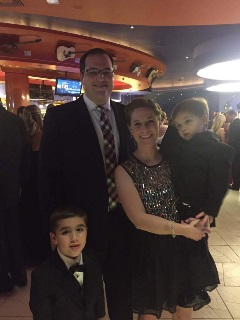 Doctors at the local hospital suggested Eli be transferred to the Children’s Hospital of Michigan-DMC where Eli could benefit from specialized expertise available at the hospital.

Eli’s kidney failure caused numerous problems which required him to be in and out of the hospital for much of his first two years of life.

“He had a major problem eating and could hardly keep anything in his stomach. He also developed pneumonia which made his condition worse,” Rachel says.

Eli underwent dialysis at the hospital and eventually had treatment at home during the evening. Dialysis is the artificial process of doing some of the work of healthy kidneys by eliminating waste and unwanted water from the blood.

Nephrology specialists explained to the family that Eli would need to undergo a kidney transplant since eventually his kidneys would not function.

Amrish Jain, M.D., nephrologist on staff who was part of the team at the Children’s Hospital of Michigan that managed Eli’s care, says patient’s as young as Eli should wait until they are at least one year old and weigh 22 pounds before they can be considered for a kidney transplant. Source 1

"Eli was on dialysis within few weeks of birth and improving his nutrition was a challenge. He had very little interest in eating and would throw-up all the time. He had to undergo a stomach tube placement (G-tube) and also received continuous feeds with specialized hypo-allergenic formula. Our goal was to get him close to the target weight for a living donor transplant,” Dr. Jain says.

Rachel and Eli’s father Adam, were tested to see if they would be a compatible kidney donor for their son. Fortunately, both were acceptable matches.

Because Rachel was a smaller size, her kidney was the preferred choice.

Eli managed to get his weight up to be eligible for the transplant. With an older brother in school, the family decided that the Summer of 2015 would be an ideal time to do the transplant.

The transplant was scheduled on 6/15. That day also happens to be Eli’s birthday.

“People kept asking if I was nervous about donating my kidney. As a mom, that was not on my mind. I only cared about giving my son the best chance at life. When I went into the hospital to donate my kidney, my last request was to ask the staff that they do everything possible that my kidney works for my son,” Rachel says.

Her wish came true. The transplant was a success according to

“Eli’s surgery went very smoothly.  His mother’s kidney fit in well in his body, and the kidney made urine immediately.  We had challenges with his incision after his operation in part because of his marginal nutrition from his kidney failure.  However, he overcame this set back and he left the hospital with a new, healthy kidney. These transplanted kidneys do not last forever, and he most likely will need another transplant kidney when he is an adult.  For now, however, he is in great shape,” says Dr. Kim.

Rachel is happy to report that now that Eli has a new kidney, he is a typical active little boy who loves to play and go on the swing. He also has quite the appetite and loves eating salami, cheese and fruit.

“We are thrilled that Eli is doing so well and will be forever grateful to the staff at the Children’s Hospital of Michigan for their exceptional care. Many members of the staff came to Eli’s one year kidney anniversary party and continually want to be updated on how he is doing. “I was told by some members of the staff that to see Eli doing so well really shows that their hard work pays off. We feel privileged to have encountered such a caring staff that truly feels like a second family.”