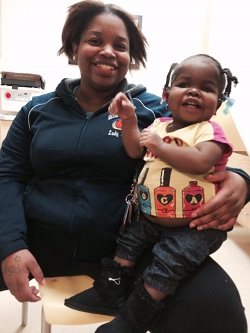 Kenshella welcomed her first and only child in 2013. Her beautiful daughter Ja’Nyla was born without complications. Within a few weeks of her birth, however, Kenshella noticed that Ja’Nyla’s eyes were yellow. Her pediatrician, recommended that she be exposed to sunlight and be fed formula every two hours.

When Ja’Nyla was seven weeks old, she developed severe diaper rash which prompted Kenshella to take her to the Emergency Room. Doctors at the Children’s Hospital of Michigan diagnosed her with jaundice and she was admitted to the hospital for further evaluation.

Ja’Nyla was seen by Namir Al-Ansari, M.D., gastroenterologist on staff, who upon further testing, found that she had biliary atresia, a life-threatening condition in infants in which the bile ducts inside or outside the liver do not have normal openings and damages the liver.

To treat her life-threatening condition, a pediatric surgeon on staff, performed a Kasai procedure to reconstruct the bile ducts and restore bile flow. Unfortunately, the treatment was unsuccessful.

Patients with biliary atresia require prompt surgical referral as several prognostic factors have been implicated in the success of a Kasai portoenterosotomy.  One such factor is the age at operative intervention.  Ja'Nyla was operated at 8 weeks of age.  Although a third of patients will exhibit restoration of bile drainage, two thirds of patients will eventually require a liver transplant, as was the case of Ja'Nyla.

When the news came that Ja’Nyla should be evaluated for a liver transplant, Kenshella was in shock.

“I was so scared and remember crying nonstop for one week trying to comprehend what this meant for Ja’Nyla,” she says.

As shocking as the news was, Kenshella was extremely grateful to the doctors and in particular transplant coordinator, Susan Forest, pediatric nurse practitioner, who guided her through the process.

“Susan was instrumental in getting me through this. She explained the treatment and process very thoroughly and calmed my fears,” she says.

On Valentine’s Day of 2014, Ja’Nyla was placed on the liver transplant wait list. But her size was a concern and optimizing her nutrition was a key priority during the waiting period.

To maintain her placement on the liver transplant waiting list, she was given special formula to support growth and had to use a feeding tube that Kenshella learned to insert and manage. She also had to give Ja’Nyla 12 medications daily to manage her end stage liver disease and its many complications.

"Building trusting relationships with parents is essential for us to be able to guide, support, and teach throughout all phases of transplantation. Kenshella's relationship with our multidisciplinary team facilitated her ongoing learning and integration into daily life including the specialized and often demanding plan of care needed to prepare Ja'Nyla for a successful transplant. She rose to the difficult challenge and has truly been an inspiration," Susan says.

On Christmas Eve, 2014, a call came that a suitable organ was available. Ja’Nyla received the gift of life on Christmas day, 2014.

"Without a liver transplant, two-thirds of infants with biliary atresia will die of complications of cirrhosis. Outcomes with liver transplantation are excellent, with the long term survival being greater than 80 percent,"says Kelly M. Collins, M.D., liver transplant surgeon. 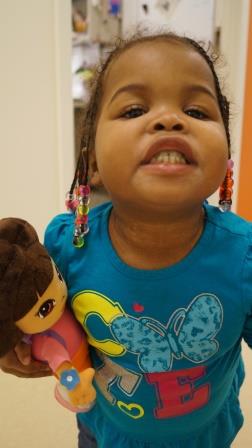 “Within a short period of time she was playing, smiling, and laughing. It was very clear she was getting stronger. She will need to be on lifelong medications to prevent her body from rejecting the liver and will need to be monitored, but we expect her to be able to do everything that other kids her age would do,” Dr. Zoubi says.

“Liver transplantation saved her life. Having J’Nyla’s mom as an integral part of the team was crucial to the success of the procedure. She is truly a remarkable mother,” he adds.

After just two days of receiving her liver transplant, Ja’Nyla was sleeping on her stomach and was standing up after just two weeks.

“She was not able to do that before her transplant. Clearly the only thing holding her back was the liver. I’m so happy to say she is active, healthy and has a gift for making people happy,” says Kenshella.

Always an advocate for organ donation, Kenshella used this experience to volunteer for Gift of Life and she encourages people to sign up as organ donors.

“My mother was an organ donor when she passed, so on so many levels I feel passionate about organ donation. As the campaign says ‘please donate your organs, heaven knows we need them here’.”