Skip to main content and our Accessibility Statement may be found in the footer of our website.
Back To Urology Stories 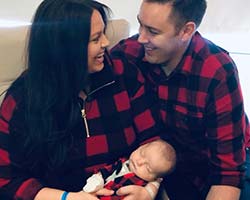 Angela and Matt of Royal Oak, could describe 2018 as a rollercoaster year filled with surprises, fear and gratitude for their first born baby boy Lachlan.

The first surprise during their pregnancy happened when an ultrasound suggested their baby was a girl.

“Then 5 days after our baby shower filled with pink tutus a routine ultrasound uncovered that we were actually having a boy,” says Matt. 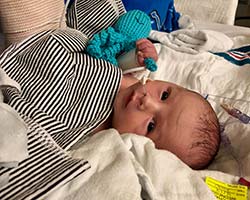 At 38 weeks into her pregnancy, Angela was induced to begin labor. She even deliberately scheduled an earlier appointment with her OB/GYN in the hope that Lachlan would not be born on Halloween, but her labor lasted 42 hours and Lachlan was born October 31, 2018 at a local hospital.

What came next was anything but a treat.

“As soon as Lachlan was born, I noticed he seemed to have some type of big bump on his belly. Next thing I knew a large team of doctors and staff were gathered around Lachlan and he was taken away without me being able to hold him for the first time,” says Angela. 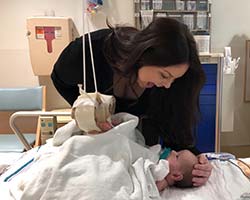 To Angela and Matt’s surprise, Lachlan was born with a very rare, complex birth defect called bladder exstrophy involving the urinary, reproductive and intestinal tracts, as well as the musculoskeletal system. The condition occurs when the abdominal wall and underlying organs do not fuse properly, and the infant is born with the bladder inside out and exposed on the outside of the body.

When many new parents are happily posting pictures on social media of their newborn, Angela and Matt were somber and worried about the future of their child. 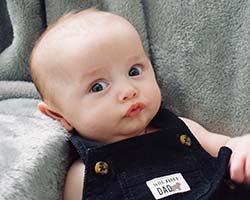 Within hours of Lachlan’s birth, he was transferred to the Neonatal Intensive Care Unit at the Children’s Hospital of Michigan DMC via the PANDA One Intensive Care Transport Team. 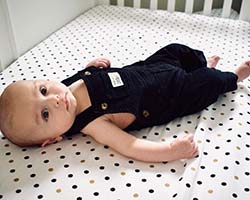 Angela was released from the local hospital early so she could bond with Lachlan for a very short time before he would undergo surgery.

Angela and Matt met with Children’s Hospital of Michigan Chief of Pediatric Urology, Yegappan Lakshmanan, MD, who explained the best course of treatment was immediate surgery. Lachlan was only 22 hours old when the complex urological 4-5 hour surgery would begin.

“As a first step, the exposed bladder was closed and placed inside his belly. As he was only a day old, we molded his pelvic bones together, without having to cut them. Our orthopedic team led by Dr. Ahmed Bazzi and Dr. Walid Yassir assisted with the special traction needed to allow the pelvic bones to heal and keep the bladder inside. Dr. Suresh Thomas from our pediatric anesthesia pain team placed a special tunneled epidural catheter, thus minimizing opioid use for post-op pain. Lachlan sailed through the whole process, and the entire team was pleased at how well he and his parents did,” says Dr. Lakshmanan. 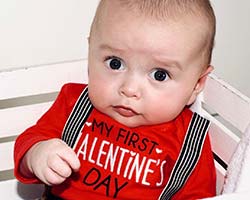 He adds that the next step for Lachlan is to repair his genitalia in a few months, and eventually a procedure to help hold his urine.

Despite the rollercoaster ride, Angela and Matt feel very fortunate with the treatment and outcome for Lachlan. 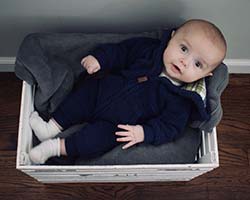 “We are so thankful to the staff, including the nurse specialists and urologists who were on Lachlan’s side every step of the way. Lachlan was 8 pounds 11 ounces when he was born so he was much bigger than the typical babies in the NICU. The staff even arranged for a special bed for Lachlan in the NICU so he could stay there during his treatment and recovery. We are also so pleased with Dr. Lakshmanan. He was so communicative. Even in between his other surgeries he would come to check in on us and our little guy,” says an emotional Angela.

Lachlan is 3 months old and doing great according to his parents. He takes one antibiotic daily but other than that he is a normal happy smiley baby who even slept 9 hours at night for his mom and dad.

“We know that Lachlan will need some follow up surgery as he gets older but couldn’t be more pleased with the outcome of his surgery and care that he received,” says Angela. 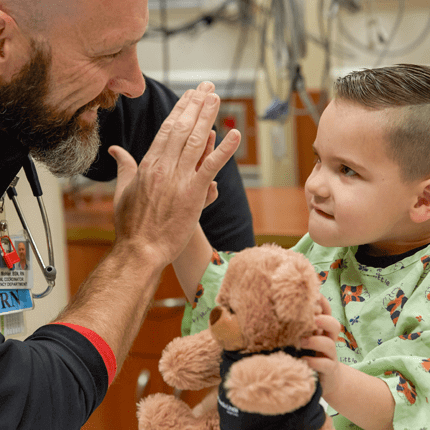 Need a doctor for your child's care?
Request a Urologist Referral