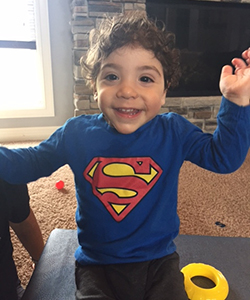 Jennifer, an adult oncology nurse from Windsor, Ontario, was 33 weeks pregnant with her second child Ben, when she became concerned there may be a problem when she was not feeling movement in her stomach.

Her suspicions proved correct when an ultrasound revealed Ben’s heart rate was dropping. A blood clot was also discovered in his umbilical artery.  Jennifer had an emergency c-section and Ben was born weighing four pounds.  Complications continued after birth.  As the day progressed Ben began to take a turn for the worst. It was discovered he had circulation issues and as a result was sent to a Children’s hospital in Ontario for further specialized care.

“We found out that Ben had developed five blood clots and had a stroke in utero affecting the left side of his brain causing right sided weakness in his hand, arm and leg. Then when he was 8 ½ months, he started developing seizures,” says Jennifer.

Ben began taking anti-seizure medications but they did not stop the seizures from developing.  A neurologist in Ontario said Ben would be an excellent candidate for surgery.

“As a result of his stroke, seizures developed on his left side of his brain, however the right side appeared healthy and not affected. The doctor explained surgery could be performed to disconnect the affected left side of Ben’s brain from the healthy right side with intent to stop all seizure activity,”  Jennifer says.

The concept of having their baby undergo brain surgery was overwhelming for Jennifer and Sam, but they knew that had to do everything possible to give Ben the best chance of overcoming this devastating condition.

Jennifer decided to do an extensive internet search on treatment options for epilepsy and read about a boy from Ireland who traveled to the Children’s Hospital of Michigan DMC to seek epilepsy surgical care from Sandeep Sood, MD, co-director of the  Epilepsy Surgery Program.

Jennifer’s sister works at the Children’s Hospital of Michigan and therefore was able to confirm the reputation that preceded Dr. Sood and the neurology and neurosurgery team had in treating epilepsy.

“I was able to meet with Dr. Sood relatively quickly and immediately felt confident that Ben needed to be treated at the Children’s Hospital of Michigan. Dr. Sood was so energetic and positive. We spent more than one year seeking answers and in 20 minutes he summarized the best course of treatment involving an endoscopic minimally invasive surgery with only a 1 ½ inch incision versus a much larger incision with traditional hemispherectomy surgery, which was recommended by the Children’s Ontario hospital,” says Jennifer. “We couldn’t believe this amazing opportunity was so close to us.”

Dr. Sood recommended that Ben have endoscopic minimally invasive hemispherotomy surgeryto disconnect the seizure producing left side from the normal right side of the brain. Endoscopic hemispherotomy was developed and started at the Children’s Hospital of Michigan seven years ago by Dr Sood. The initial experience was published in Journal of Neurosurgery in 2015.

“The last 18 of the 100 disconnective procedures done for epilepsy at the Children’s Hospital of Michigan have been done using this technique,” said Dr Sood. “We now use a 3D endoscope that provides better lighting, magnification and adds precision to tissue dissection in this operation.  To the best of my knowledge, currently, the Children’s Hospital of Michigan is the only institution in North America that offers the endoscopic surgery for corpus callosotomy and hemispherotomy.”

Dr. Sood adds that the treatment pioneered at the Children’s Hospital of Michigan reduces or eliminate the need for large skull incisions and accompanying risks, including pain, infection, need for blood transfusions and lengthy hospital stays.

“Ben has had no seizure since his surgery and within days started taking interest in his surrounding and making attempts at speaking. The stiffness in the right arm that he had, as a result of the stroke, has started to ease”.  He is expected to remain completely seizure free,” he says.

It’s been a few months since Ben had his life-altering epilepsy surgery at the Children’s Hospital of Michigan and both Jennifer and Sam are eternally grateful to Dr. Sood and the neurology and neurosurgery team as well as the rehabilitation team that is doing everything they can to continue with his full recovery.

“As we were going through a very dark and gloomy situation, we  gave Dr. Sood and his team our Ben. He came back from surgery as a totally different child. We feel his recovery is a miracle. He goes to speech, occupational and physical therapy twice a week at the Children’s Hospital of Michigan to help with some developmental delays that were present before his surgery, but Dr. Sood has given us the best news that Ben is on his way to a full recovery. We are so grateful for the care and hope this story will help others who may be going through a similar situation,” says Jennifer.