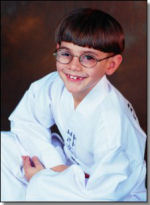 As a single mother and immigrant from Honduras, Blanca was unprepared for the medical maze she encountered when her son Christian was diagnosed with cancer in both eyes at age two.

She was alone, angry, scared and unhappy with the care she received at one suburban Detroit hospital. And she was confused.

She originally had taken her son to the doctor because she thought he needed glasses. And now they were telling her that it was far more serious than that.

Her English wasn't that bad - in fact, she had worked as a nanny for a wealthy family in Birmingham. But she knew there was a communication problem when it came to her son's illness.

"We went to a community hospital," she recalled. "Christian would cry and nobody would come. I would ask questions and get no answers. At Children's Hospital it was different. If he cried, they would bring toys and books. And they helped me. All of a sudden, I had a team."

"Everybody at Children's Hospital helped to educate me," she said. "The nurses would hug me and tell me everything would be all right. The hospital chaplain would hold my hand at two in the morning and pray with me. I'm Catholic and my faith is important. I admit I was really angry. I was walking away from my beliefs. But my priest at St. Vincent de Paul in Pontiac, the hospital chaplain and Dr. Roarty all helped me."

Christian had his surgery in July, 1996. He came home the same day. The next day, he was jumping and running through the house.

"He was 2-1/2 and he would say, 'Don't cry. God loves me,'" Blanca said. "I got strength from my son and Children's Hospital." Today, Christian is a bright 8-year-old student at Whitman Human Resource Center in Pontiac. He is frequently called upon by his teacher to help classmates learn to read. He loves music and tae kwon do and wants to be a doctor when he grows up.

His mother has offered to be part of the team at Children's Hospital of Michigan.

"If there is another family in that situation, I want to help," she says. "I've told the doctors. I will talk to them. When they are ready to listen, I will help."