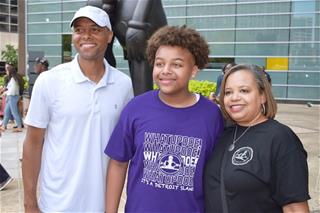 When Phyllis was pregnant with her first and only child CJ, she remembers singing to him in the womb. She says that although she does not have musical talent, CJ’s father is a worship singer in church.  It became very evident at a young age that CJ was a gifted singer.

“CJ would perform in church and there would not be a dry eye in the house,” says Phyllis.

CJ who is 14 years old, has excelled in school, singing and performing, but at around 9 years of age, he started falling asleep in school and it became evident something was not quite right.

“I would suddenly fall asleep in class and my teachers thought I was staying up late playing video games but I don’t play video games,” says CJ.

“They tried many techniques to keep me awake during school like having me stand in the back of class with a yoga ball but I would still fall asleep,” he adds.

“The first one was a whole night sleep study to rule out any underlying sleep disorders. The next day, CJ had a series of naps during the daytime to objectively assess the degree of sleepiness and occurrence of REM sleep during these naps.  The nap study showed severe sleepiness with several REM sleep onset episodes,” he says.

CJ was diagnosed with narcolepsy, a chronic sleep disorder that causes a frequent and overwhelming need to sleep during the day, even despite getting enough nighttime sleep.

Dr. Abdulhamid explains that even though there is no cure for pediatric narcolepsy, it can be managed with proper sleep schedules and medications. These include adequate and regular night time sleep, and few short “power” naps during the daytime.He was also started on stimulant medications to improve alertness during the daytime.


CJ says the medication and treatment recommendations helped him manage his narcolepsy during school as well as life-changing activities including becoming part of the Detroit Youth Choir. They would go on to receive national acclaim as a runner up on America’s Got Talent competition in 2019.

Phyllis, who took a month of unpaid leave from her job to be with her son and help him manage his narcolepsy when CJ and the Detroit Youth Choir were in Los Angeles during the NBC show competition, was very thankful to the Sleep Center Staff at Children’s Hospital of Michigan for the care received before, during and after the competition.

“We are so thankful to the staff including Dr. Abdulhamid, the nurses and psychologist to help CJ manage his narcolepsy. We will never forget the extra steps they took to help CJ like when he ran out of his medication in Los Angeles and his medication arrived overnight,” she says.

CJ, who has a meme of his expression when the choir received the golden buzzer on American’s Got Talent, guaranteeing  going  into the live semi-finals,is now in high school. Due to COVID-19 and entering high school he has taken a break from the Detroit Youth Choir.

His passion for performing continues however. CJ would like to pursue music in the future and would love to be a professional singer.  He plays the tenor sax in the school band and takes piano lessons.

“We believe there is a healing element in music and music helps him deal with his narcolepsy condition,” says Phyllis.

For other kids that have narcolepsy, CJ offers his words of wisdom.

“It will always be a struggle but I have learned to manage it better and it won’t stop me from succeeding in life.”