Drew of Washington, Michigan was a very active and healthy young man who excelled at many activities including Lacrosse and Football. But at age 15 he started to develop gastrointestinal symptoms. His mom, Lisa, said he was never a complainer so as the symptoms including pain and fatigue progressed, his family practitioner suggested he see a gastrointestinal specialist at a local hospital. Drew had a colonoscopy and doctors found a huge polyp. Surgery was performed and 15 inches of his colon was removed. 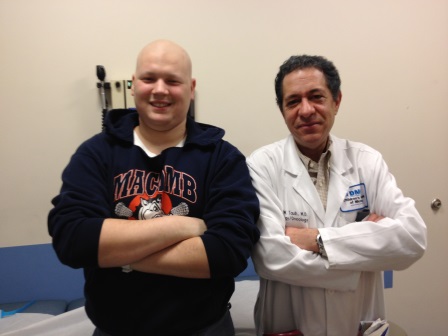 The good news was the biopsy was negative. "I had a very bad feeling even though the biopsy was negative that doctors thought there was a serious issue," says Lisa. Her instincts were correct when after further testing, Drew was diagnosed with Burkitt's Lymphoma, a rare and very fast growing form of non-Hodgkin's lymphoma.

Lisa, who is an occupational therapy assistant, had a friend at a major cancer center who highly recommended that Drew be evaluated by Jeffrey Taub, MD, division chief of oncology on staff at DMC Children's Hospital of Michigan. Dr. Taub specializes in lymphoma and is also a cancer survivor. Lisa felt immediately at ease with Dr. Taub and fortunate that Drew was able to see a highly respected specialist in lymphoma. "I was told the type of lymphoma he had can double in just 24-48 hours and Dr. Taub insisted on seeing Drew immediately," says Lisa.

Drew had a very aggressive treatment plan, entailing chemotherapy and steroids over a four month period. He had a few setbacks where he had to be hospitalized for infections, but Lisa grew increasingly confident with the entire hospital staff. "It seems like every time there was a setback, the staff knew exactly what to do and always put us at ease."

Drew, who received an athletic scholarship from Sienna Heights University to play Lacrosse and will be playing in the Fall of 2014, wasn't able to play for the first three weeks of the season in high school while he was seeking treatment and recovering. Lisa said his first question when he was diagnosed was would he be able to play Lacrosse? Dr. Taub wanted him to wait a little longer before he would return to the sport. Drew brought in all of his protective gear to convince Dr. Taub he was protected and could play. Lisa said Dr. Taub's motto is not to let cancer win, let kids win, so after doing some testing he gave the approval for Drew to play and he made the varsity team as a sophomore at Romeo High School. 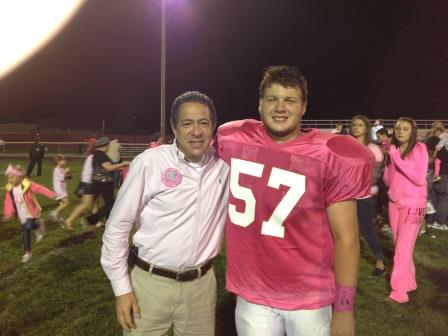 Dr. Taub says being a pediatric oncologist can be very challenging, though taking care of patients like Drew is very rewarding and inspires him as well as the staff to continue the fight against cancer. "I am very proud of how Drew didn't let cancer get in the way of going to school and participating in sports despite a very chemotherapy intensive treatment. He has big goals for his future which he will achieve," says Dr. Taub.

Out of this tragedy there are some good things that came about. Lisa says Drew told Dr. Taub that he wants to be a pediatric oncologist just like Dr. Taub and specialize in lymphoma. "He does so much and even does magic tricks for his patients," says Drew.

Lisa cannot say enough great things about the entire staff and Dr. Taub. "He may have all these patients, but when he would see Drew, it felt like he was the only patient he had. To say he would go above and beyond is an understatement. I have very personal and overwhelming great feelings for Dr. Taub. He saved my son's life."