Insulin Pump Gives Girl Control Over Disease and Own Life 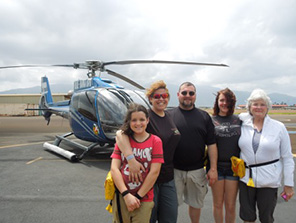 Elise Nitz of Livonia was just three-years-old when her mother Elizabeth noticed some changes that warranted some medical attention. Elise was losing weight, excessively thirsty and going to the bathroom all the time. “My father is a doctor and when we discussed her symptoms he recommended I take Elise to DMC Children’s Hospital of Michigan,” says Elizabeth.

At the hospital, Elise was diagnosed with Type 1 diabetes. An important part of her stay involved the need to be educated on managing diabetes such as counting carbohydrates, taking insulin shots and managing blood sugar.

According to Elizabeth, Elise was managing her diabetes but there were many challenges. Elise would have to eat, even if she was not hungry and the long lasting insulin shot she was taking resulted in blood sugar fluctuations that caused problems.

Elise’s physician, at DMC Children’s Hospital of Michigan, suggested she receive an insulin pump. The insulin pump delivers rapid- or short-acting insulin 24 hours a day through a catheter placed under the skin and makes it easier to keep blood glucose levels within the target ranges.

“For Elise and our family, the insulin pump changed our lives almost as much as being diagnosed with diabetes did,” says Elizabeth. Instead of diabetes controlling Elise, the insulin pump has given Elise the control to better manage her diabetes, according to Elizabeth. “She does not have to take shots. Although she still has to count carbohydrates, she has more flexibility in eating when she wants to eat. It has made a dramatic difference in not only Elise’s life but our life as a family.”

Elizabeth says it’s important for children to learn to take control and manage their diabetes because it makes them smarter and healthier. Elise had a unique opportunity to advocate for diabetes care and treatment when she met with Senator Carl Levin, United States Senator for Michigan, a day before her 11th birthday and thanked him for supporting diabetes funding.

“We feel very fortunate not only for the insulin pump therapy, but for the excellent care provided by the Children’s Hospital of Michigan and its Diabetes Clinic. It is the best in the state and we are lucky to be there,” says Elizabeth.