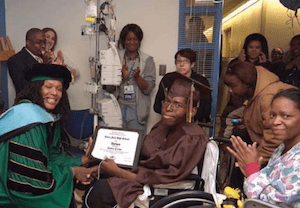 Joshua Taylor spent the last eight years of his life in a wheelchair dealing with the progressing symptoms of Duchenne muscular dystrophy, but it never stopped him from embracing life to d1e fullest and dealing bravely with death.

Just ask his doctor at the Children's Hospital of Michigan. "He was an incredibly inspiring individual," says Nadia Tremonti M.D., medical director of palliative medicine at Children's Hospital, and assistant professor of pediatrics at Wayne State University School of Medicine.

As head of palliative medicine, one of Tremonti's jobs is building a program to care for patients and their families who are facing che possibility of death. Since starting the position in July 2007, she provides supportive care for 45 children and their families, is introduced to about 10 families a month, and stays in touch with 25 bereaved families. '1 plan to follow these families as long as I am here," says Tremonti.

It is this kind of care that prompted Joshua to ask Tremonci co keep in touch with his family after he dies. "At the end of his life, I  was his primary doctor. I was the safe person to talk with about emotional and intellectual things he was going through - how he was seeing death, how chat was hard and how he felt about leaving his mod1er behind. le was very important to Joshua that I would continue to check in on his mom long after he was gone," Tremonti says.

Palliative care is about making the most of the time chat we have. One of Joshua's goals was to graduate from high school. On February 15, 2008, Joshua graduated from Herny Ford High School in from of a crowd of family, friends and teachers. Tremonci, who suggested the hospital gradu­ation, also was there. Joshua died nine days later, on his 19d1 birthday, just after family and staff sang "Happy Birthday" to him while holding his mom's hand.

Since his death, his life has been celebrated several times, says his mother Cynthia Taylor of Detroit.

At the high school senior break­fast at Masonic Temple downtown, there was a tribute to Joshua, where he received a standing ovation. At the school's graduation commencement speech, he was praised for his accom­plishments. 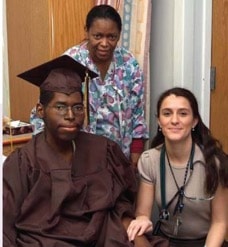 Taylor, a licensed practical nurse at a Detroit nursing home, says her son was "wise for his years. His friends would come to him for advice," she says.  He earned good grades, liked movies and even played baseball for five years before being diag­nosed with muscular dystrophy. He also liked to write poetry.

"He was a whiz at chess, which he taught himself on the computer. He beat his doctor the first time he played with her," Taylor says.

Another goal Joshua had was to attend the University of Michigan and find a cure for the type of muscular dystrophy he had. Over time, muscles deteriorate and patients become wheelchair bound. While not all types are fatal, for many the disease event usually affects the muscles for breathing and the heart. Children with Joshua's kind of muscular dystrophy typically die in adolescence or early adulthood.

As Joshua became increasingly ill, he spent more time at Children's Hospital. "It's a wonderful hospital," Taylor says. " It allows kids to be kids without adult intervention. It lets them be who they are. Joshua had roommates who were older, who enjoyed playing video games with him and watching TV like he did. She was comfortable being an older patient there."