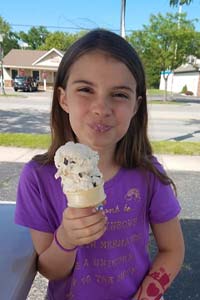 The journey to figure out the source of her health issues began near her home town of Burton, Michigan, a suburb of Flint.

Her mom Jennifer says Kara initially saw a local doctor who thought it was a virus, but the pain and fever continued.

“I can’t express the anguish you feel as a parent when you see your daughter crying of excruciating pain and not being able to help her,” she adds.

After seeing several doctors, blood tests and an endoscopy procedure was performed to see what could be the source of her gastrointestinal pain. Endoscopy involves inserting a long, flexible tube (endoscope) down your throat and into your esophagus. A tiny camera on the end of the endoscope assists doctors in examining the esophagus, stomach and the beginning of the small intestine.

Unfortunately the endoscopy did not reveal why Kara was having abdominal pain. Kara was also seen by a pediatric rheumatologist to determine if the pain and fever was caused by periodic fever syndrome. The group of disorders are genetic and causes recurrent episodes of fever over time, usually accompanied by the same symptoms. In addition to fever, symptoms include rash, joint pain and swelling, mouth sores and abdominal pain. 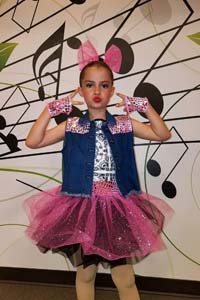 “Despite all of the tests, we did not get an answer of what was causing Kara’s condition. A local doctor then suggested we go to Children’s Hospital of Michigan for further gastrointestinal evaluation,” says Jennifer.

Kara was seen by Tony Lulgjuraj, MD, gastroenterologist at Children’s Hospital of Michigan, who recommended that Kara undergo capsule endoscopy, a procedure that uses a tiny wireless camera to take pictures of the digestive tract. A capsule endoscopy camera sits inside a vitamin-size capsule that is swallowed. When the capsule travels through the digestive tract, the camera takes thousands of pictures that are transmitted to a recorder worn on a belt around the waist.

“After hearing Kara’s story, realizing that a fever and ulcer syndrome like hers could cause ulcers in the small intestine that an MRI and scopes would miss, I recommended the capsule endoscopy to examine the areas of the small bowel that is missed by these other tests. Thankfully for Kara, the test was normal which made her mom and me more confident we weren’t missing an illness of the intestine that needed different treatment,” says Dr. Lulgjuraj. 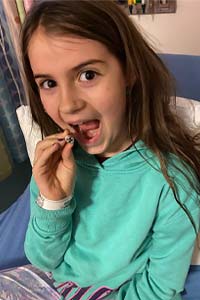 Kara was able to keep moving forward with her local rheumatologist and Dr. Lulgjuraj to treat her pain.

After seeing many doctors, Jenny is thankful that Kara was seen by Dr. Lulgjuraj and specialists at Children’s Hospital of Michigan.

“Although we are still trying to figure out what medicine may help with Kara’s pain, the capsule endoscopy did bring reassurance regarding which route to take for treatment and that it was not an intestinal issue. It probably prevented her from having to have exploratory surgery and I am thankful for that,” says Jennifer.

As for Kara, she provides some helpful advice for other children that may be hesitant to undergo the capsule endoscopy procedure.

"It was a little scary at first when they said I had to swallow a camera because I didn't know what to expect. I was a little nervous and I didn't think I could do it. It was easy though. It just slides right down. I got it the first time," she says.