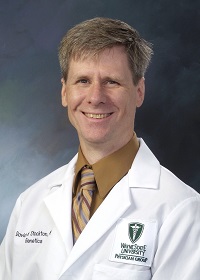 When the news broke just a few weeks ago that the U.S. Food and Drug Administration had approved the use of a new drug compound to treat a rare genetic disorder in children, nobody was more pleased than the Children’s Hospital of Michigan genetics specialist David W. Stockton, M.D., FACMG.

Dr. Stockton - the chief of the division of genetic, genomic, and metabolic disorders within the Department of Pediatrics and the Children’s Hospital of Michigan - part of the Detroit Medical Center (DMC), who also serves as a professor of pediatrics and internal medicine at the Wayne State University School of Medicine – played a key role in the research that led to the FDA decision to approve the new compound for treatment of patients with the potentially life-threatening metabolic disorder known as hereditary orotic aciduria.

The FDA approval of Xuriden, which has proved effective in treating hereditary orotic aciduria, a genetic disorder caused by a defective enzyme that helps regulate metabolism, came after Dr. Stockton and another investigator conducted a successful clinical trial that demonstrated the compound’s efficacy.

The FDA also awarded "orphan drug status" to the compound, while noting that the disease it treats is extremely rare and is believed to affect fewer than two dozen patients worldwide. The "orphan" status provides federal financial support for research on and development of drug compounds used to treat rare diseases and disorders.

"The FDA approval of Xuriden was part of a long and complicated research effort," said Dr. Stockton, who has spent more than seven years caring for patients with the disorder, during which time he collected data that described the drug’s effectiveness. "I think this very encouraging outcome sends a hopeful message to patients who struggle

with rare diseases. For all of us – including my colleague at the University of Pittsburgh, Dr. Gerard Vockley, who manages the other half of the study participants that led to this breakthrough -- winning FDA approval for the drug, along with the orphan status, shows how it’s possible to help patients by conducting studies on compounds for patients with even the rarest kinds of diseases and disorders.

"But I also want to commend the current manufacturer of this new compound, Wellstat [Therapeutics Corp.] for its willingness to invest resources on researching and developing a product that would appear to have a very limited commercial market," He added.

The disorder targeted by Xuriden (uridine triacetate) is inherited, Dr. Stockton said, and occurs when a defective gene causes a breakdown in the body’s ability to synthesize uridine – an essential ingredient in the manufacture of DNA and RNA. When that happens, various blood abnormalities (such as anemia and reduced production of white blood cells) – along with urinary tract disorders such as the development of orotic acid crystals – are often the result.

Both the safety and the effectiveness of the new drug in treating the disorder were demonstrated during a six-week, open-label trial in four patients. Conducted by Drs. Stockton and Vockley, the research – involving patients ranging in ages 3 to 19 – confirmed "stability of the hematologic parameters," according to the FDA, which also announced that there were "no side effects observed in patients treated with Xuriden for up to nine months."

For Dr. Stockton, who has been treating pediatric patients for the past 23 years, the recent FDA approval was "a very gratifying outcome" after more than six years of clinical research on the disease.

"I was very excited to hear the news," he said, "and I do think this is a hopeful moment for all of us who work in the field of children’s health care each day. I think it also illustrates the importance of linking research with clinical practice. Quite frequently, doing research that helps you understand the science behind genetic diseases will open new pathways to new treatments, which is one of our key goals as physicians who take care of kids."

The Children’s Hospital of Michigan Pediatrician-in-Chief and Chair of the Wayne State University School of Medicine’s Department of Pediatrics Steven E. Lipshultz, M.D., echoed Dr. Stockton’s hopeful assessment. "Dr. Stockton’s commitment to both excellent clinical care and meticulous clinical research continues to inspire all of us," he said.

"There’s no doubt that this kind of groundbreaking clinical research is an essential ingredient in achieving better health outcomes for patients. From the lab to the bedside, the Children’s Hospital of Michigan has been pushing the boundaries of pediatric medicine with new therapies since its inception. Home to one of the world’s larger research enterprises within a pediatric medical center, our innovative approach to care has contributed to two new medications for children with rare diseases having achieved

FDA approval in the past year alone. These new medications are now being used to improve the quality of lives of children throughout the world. Because we have science transforming life daily, the Children’s Hospital of Michigan is the future of pediatric medicine today."

Wayne State University is a premier urban research institution offering more than 400 academic programs through 13 schools and colleges to nearly 32,000 students. Its School of Medicine is the largest single-campus medical school in the nation with more than 1,200 medical students. In addition to undergraduate medical education, the school offers master’s degree, Ph.D. and M.D.-Ph.D. programs in 14 areas of basic science to about 400 students annually.