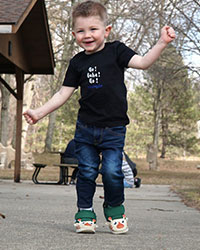 By far the most active person navigating the pathways of Plymouth Township Park March 11 was 3-year-old Gabe Palazzolo, who was also the only one in the area who had undergone a delicate and life-changing spinal surgery less than two months earlier.

Diagnosed with spastic diplegia cerebral palsy just after his first birthday, he was limited to crawling and walking with the assistance of a walker until January's selective dorsal rhizotomy (SDR) surgery at Children's Hospital of Michigan. The only child of Plymouth's Manny and April Palazzolo is an uplifting example of resilience, cruising through the park with the speed of a sprinter — sometimes with his walker, other times without.

"Now that Gabe has more freedom, I think he feels a new kind of happy," April Palazzolo said as she watched Manny chase down the super-swift Gabe.

An approximate one-centimeter incision is made in the patient's lower back, allowing doctors to remove selected nerve roots that cause the stiffness and hypertonicity that prevent children with cerebral palsy from bending their legs.

"It is far less invasive than it was 10, 15 years ago," Dr. Marupudi said. "It used to be done with a lengthy opening in the lumbar region. This sometimes led to lifelong deformities and scoliosis. We don't see any of these complications now and the children recover a lot faster." 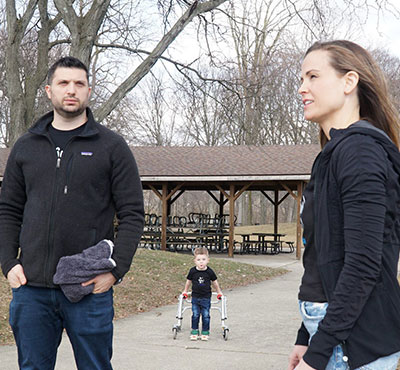 Dr. Marupudi explained that few of her patients recover as quickly as Gabe, who is already surpassing post-surgery mobility milestones that most SDR patients don't conquer for six to eight months..

Why has Gabe been able to smash all of the goals and expectations?

"We've been debating this," said Dr. Marupudi. "Part of it is, he's Gabe. He's really a special child. His age and internal motivation are also key factors. The younger the child, the faster the (post-surgery) recovery because their muscles are hyper-tone for a shorter period of time. 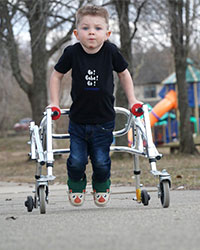 Both high school soccer players — Manny at Salem, April at Livonia Stevenson — the Palazzolos attended Michigan State University but didn't meet until a mutual friend introduced them after college.

The first year of Gabe's life was uneventful health-wise.

"Just after he turned 1, Gabe still wasn't walking by himself, so we took him to a physical therapist," Manny said. "They told us there was a possibility he had cerebral palsy, which we weren't expecting at all."

"It was very shocking," April added.

The Palazzolos first learned of SDR when Gabe was approximately 18 months old.

"At that time, we were hoping that he would get to where he is now by himself, without surgery," Manny said. "But he never got there."

The Palazzolos' primary health-care provider wanted to delay the procedure until he was 4 or 5, said April.

"When we sought a second opinion at Children's, they evaluated Gabe and said, 'Let's do it now'," she said. "It was a life-changing decision for us."

SDR requires a seven-week hospitalization following the surgery — a period that provided daunting (but expected) setbacks for Gabe and strong bond-building between the Palazzolos and the hospital staff.

"The first three days following surgery Gabe had to lay flat on his back, without moving," Manny explained. "He couldn't even lift his head up by himself; we had to hold him like he was a baby again. But Gabe never complained. Not once. His attitude was amazing."

"Following the surgery, the kids go back to square one as far as their legs are concerned; they lose all tone," April added. "They told us that there would be setbacks before we would see improvement. That part was hard."

Once Gabe overcame the initial hurdles, he quickly became a bright spot for everyone who crossed his path at the hospital.

"He was interacting with everybody: the maintenance staff, the cooks, doctors, nurses, even the guys who cleaned the floors," Manny said. "Everybody knew Gabe's name."

"It was very consuming therapy, but obviously we got outrageous results, so it was worth it," April said. "They said he'd be completely back to his baseline in six months. He reached it in a matter of weeks.

"On day 10 after surgery, Gabe told me, 'My boo boo will feel better' and he wanted to try and walk. I said, OK, not getting my hopes up, but he got right up and took a couple steps."

Gabe's release from the hospital ignited a tidal wave of emotions for the Palazzolos, who walked hand-in-hand with their son through a gauntlet of cheering hospital staff members, most of whom were shedding tears of joy.

"He was acting kind of shy, with all the people watching him, so I was focused on persuading Gabe to walk down the hall," April recounted. "If I had just been in the moment, oh my gosh, I would have been a mess. 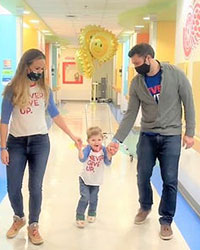 "Everyone had worked so hard for this moment, to see Gabe walking by himself out of the hospital, it was such an emotional moment."

While Gabe's progress has been remarkable, there is plenty of grueling (and rewarding) work ahead, the Palazzolos acknowledged.

"He'll have four days a week of pretty intense therapy for two years," April said. "Children's hits their kids pretty hard with therapy because that's when they see the best results.

"Gabe still has a long road ahead of him. This procedure isn't a cure. But through it all, he has shown everybody that he's a fighter."
Source: https://www.hometownlife.com/story/life/community/observer/plymouth/2021/03/17/plymouth-3-year-old-progresses-after-spinal-surgery/4636022001/