Young Boy With Cancer Finds Beauty of Life Through Art 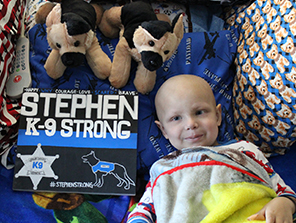 When Stephen of Rochester Hills, was four-years-old he hit his head with a shampoo bottle. Most parents would not be concerned, but in this case it triggered further investigation as his mom Mariana noticed the initial bump he received started getting bigger and bigger. Soon after, Stephen had a fever prompting Mariana to take him to the local emergency room.

The news was not good. A CT scan revealed Stephen had a tumor in his head and his chest.

“It was midnight and I am in the ER by myself when I received news from the doctors that they are not hopeful or optimistic about Stephen’s condition. They said he likely has lymphoma or neuroblastoma,” says Mariana.

Stephen’s condition was unstable due to the tumor affecting his lungs and heart and he was transferred by ambulance to DMC Children’s Hospital of Michigan.

Stephen was admitted to the Pediatric Intensive Care Unit where he underwent diagnostic tests and treatment. A biopsy confirmed that Stephen had Stage 4 Neuroblastoma. Neuroblastoma is the most common type of cancer in infants that forms in certain types of nerve tissue.

The news was devastating to Mariana and the family, but she was also thankful that Stephen was being treated with experts at the Children’s Hospital of Michigan.

“I am so appreciative of the entire staff including Dr. Roland Chu and all the nurses. Despite the serious diagnosis, Dr. Chu was comforting and prepared me that the treatment would be very challenging but to not give up and take one day at a time,” she says.

Mariana and her family knew there was no option but to stay strong mentally during this challenging time and was introduced to Victoria Goldsmith, MA,  LLPC, Child Life art therapist at the Children’s Hospital of Michigan,who suggested Stephen participate in a  symbolic art making activity as part of the Breaking Barriers art therapy project. A wooden board was painted with symbolic images selected by Stephen and his mother reflecting one of his many sources of support and strength.

Stephen aspires to be a K-9 police officer and a firefighter when he grows up. Victoria says Stephen’s unwavering determination to continue battling cancer embodies the very meaning of strength, bravery and courage. When talking to Mariana, it made sense to focus the board on the first responders he admires so much.

“Our collaborative art making for this project focused on providing Stephen with as many choice making opportunities as possible, as so many choices are stripped away from children when they are ill in the hospital,” says Victoria.  “Choices presented to Stephen, to help establish a sense of control focused on details as the colors, layout, fonts and the included images; like clarifying exactly how many points are on a sheriff’s badge. The completed image resulted from the described collaborative effort and the ‘rough draft’ drawing that Stephen and his mom initially provided. The symbolic image was particularly special because not only does it represent one of Stephen’s future career aspirations, but it also represents one of his amazing sources of support; as he has pretty much been adopted as an honorary Junior Sheriff by Michigan’s Oakland County’s Police department,” she adds.

The completed board was then shipped to New York city to be included as a part of the Breaking Barriers successful world record event in May of 2017. During this event martial art master Leif Becker was going to attempt to break 12,000 wooden boards over a consecutive 24-hour period. The premise for the event was that each board included in this event was a representation of the various challenges sick children, like Stephen, live with and battle every day. Becker’s use of his hands, arm and feet to then break these boards, was intended to symbolize breaking through the challenges kids and families face when fighting illness. Leif Becker successfully set a new world record breaking a total of 12,120 wooden boards, including Stephen’s, while raising funds for EnCourage Kids Foundation.

Mariana says one of the most positive aspects of this devastating disease is how Stephen has gained worldwide support from officers and K-9 units. His Facebook page #StephenStrong has more than 2000 members from all over the world cheering him along his journey.  Photos and cards of support have been displayed on his hospital room.

“Stephen has his good days and bad days but we have learned the power of not losing faith and hope when you are dealt with this type of challenge. Thanks to the support of our family, world-wide community, nurses, doctors and health care staff, we know that you may have to fight and stay strong but anything is possible,” says Mariana.

The Hematology/Oncology program at the Children's Hospital of Michigan at the Detroit Medical Center is consistently ranked among America's best in U.S. News & World Report's Best Children’s Hospitals rankings.