Kennedy Carter of Mayville, Michigan, knows a thing or two about being in the hospital. After complaints of feeling weak and anemic in 2008, doctors at DMC Children’s Hospital of Michigan determined she had microscopic polyangiitis (MPA), a disorder causing blood vessel inflammation which can lead to organ damage. 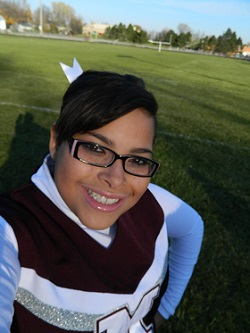 In Kennedy’s case, the disorder affected her kidneys which caused them to fail. Rudolph Valentini, MD, Chief Medical Officer at the Children’s Hospital of Michigan, says Kennedy was courageous throughout the early months of her kidney failure. “She had to accept the fact that her kidneys could not be returned to normal function due to the advanced MPA. As such, she would need hemodialysis at the Children’s Hospital of Michigan three days per week for several months.”

Kennedy’s mom, Stacy, says she was forced to miss many days of school and was in the hospital for more than 90 days. Once her disease stabilized, Kennedy was changed to home peritoneal dialysis which allowed her to spend more time at home and reduce her school absences. Although dialysis could continue for some time, her best hope was for a kidney transplant.

Fortunately for Kennedy, a match was found after only a few months and in October of 2010, she received her lifesaving kidney transplant.

Since her transplant she has not been admitted to the hospital and only goes in for routine care.

She is back at school, on the cheerleading squad and participates in the Imagine Photo Club, a program at the Children’s Hospital of Michigan designed to help patients tell their own story through photographic images.

Fortunately, Kennedy is spending fewer days as a patient and more time helping other kids at the hospital.

Kennedy has started a non-profit organization called Kids Just Care (KJC). This charity, whose initials match those of Kennedy, aims to raise money and provide toys for kids at the hospital. She has made bracelets and raised more than $1,000 her first year. Her hope is to double that amount this year.

Kennedy’s mother Stacy says with great emotion, her family will never forget the generosity of the donor family. “We recently learned the donor was a 33-year-old mother of three. As a parent, I cannot imagine having to make that selfless act. Words can never express the gratitude we have.