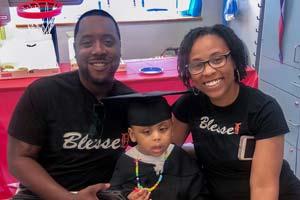 As active members in the community, Jason and Mieasha of Detroit, were eager to support their work’s sponsorship of the annual Hydrocephalus Association (HA) Walk to raise awareness of the disorder.

“We had participated in the walk for three years. Mieasha was pregnant with our son during the walk and we named him Amour at the walk which means love in many languages,” says Jason.

Because of their participation in the walk, Jason and Mieasha became informed about Hydrocephalus, which occurs when there is an abnormal accumulation of cerebrospinal fluid (CSF) within cavities in the brain called ventricles. As the CSF builds up, it causes the ventricles to enlarge and the pressure inside the head to increase. In infants symptoms include, enlargement of the baby’s head, and may include nausea, vomiting, headache and vision problems. If left untreated it can result in death.

Mieasha, who has two teenage children from a previous marriage, said the pregnancy and delivery with Amour was routine, but around 6 months of age, her instincts told her something was not quite right with Amour.

“His head seemed to be getting bigger and I was still holding up his head at six months. Comparing him to my older children, my intuition told me his developmental milestones may be off,” Mieasha says.

She took Amour to his local pediatrician where she expressed her concern and wondered if he had hydrocephalus. 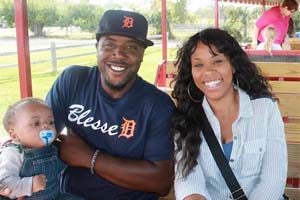 “Due to my concern, Amour’s pediatrician ordered an ultrasound on a Friday and two days later I was talking to Dr. Sandeep Sood at Children’s Hospital of Michigan about needing emergency brain surgery on Amour on Monday,” she says.

“A ventriculoperitoneal shunt was done to direct excess fluid away from the brain to the abdomen to reduce the increasing pressure on the brain,” he says.

Despite the serious situation, Jason and Mieasha who believe in exuding positive energy, were confident that their faith and expertise of Dr. Sood would get Amour through the operation.

They remember that right after the shunt procedure they could immediately tell a difference in Amour and saw a positive change in his personality. His smile changed.

Mieasha says Amour is a tough fighter and his fighting spirit has brought him through additional life threatening challenges including additional procedures to alleviate the hydrocephalus, treatments for arteriovenous malformation, aneurysms and seizures caused by his condition. 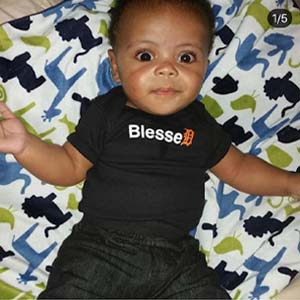 To date, the 5-year-old boy, has had seven brain surgical procedures.

“At one point, an out of state physician who was consulted, suggested that we may need to prepare Amour for hospice and there may not be much hope. Dr. Sood felt differently and so did we. Amour has made an extraordinary comeback. To our amazement he is making great strides cognitively. He is working on talking, eating and is taking steps and standing, so we know he will be walking,” says Mieasha.

Jason and Mieasha continue to give to the community by sharing their story and advocating for the need for support for Children’s Hospitals across the country through participation in Family Advocacy Week. The week offers the opportunity for patient families to represent children's hospitals and engage with lawmakers in their states and districts—either by video conference or in-person as appropriate.

For others going through a similar situation Jason says have faith over fear.

“We needed to be strong for Amour and between our faith and the wonderful knowledge of these doctors, we had confidence that somehow it would all come together,” he says.