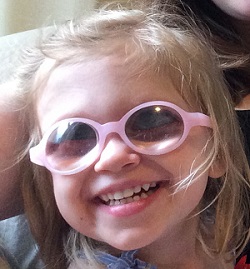 Like many parents, Ann and John Devereux were excited to learn the sex of their first child. But a few weeks before their baby girl Avery was born, an ultrasound revealed disturbing news.

“The ultrasound revealed that Avery had a very large cyst in her brain, almost the size of a tennis ball, says Ann.

Shocked at the news, there was even more to be concerned with after Avery was born. Doctor’s at a suburban hospital where Avery was born told the family Avery may have a rare eye disorder called Peter’s Anomaly. The rare genetic condition can cause thinning and clouding of the cornea and attachment of the iris to the cornea, which causes blurred vision. It can also cause clouding of the lens (cataracts) of the eye or other lens abnormalities. Avery who was blind at birth also had severe glaucoma in addition to the cyst in her brain.

Doctor’s referred the family to John Roarty, M.D., chief of Ophthalmology on staff at Children’s Hospital of Michigan at the Detroit Medical Center.

“We immediately felt very comfortable with Dr. Roarty who confirmed that Avery had Peter’s Anomaly and severe glaucoma. From the very beginning he was very thorough in explaining the seriousness of the disorders and helped us greatly in managing expectations of what the future may hold,” says Ann.

“Avery’s condition has required several surgeries on each eye to restore functional vision. As there is a risk of blindness still, careful follow-up will be needed. It has been impressive how Mr. and Mrs. Devereux have managed the frequent visits and the stress of surgery. Most amazing is Avery. I have never had a child so cooperative and relaxed at this age. She gives us all strength,” says Dr. Roarty.

Avery had the first of 14 eye surgeries including several cornea transplants performed by Steven Dunn, M.D. ophthalmologist and cornea specialist on staff at Children’s Hospital of Michigan, when she was just a few weeks old.

While Avery was undergoing treatment for her vision, doctors at the suburban hospital suggested that Avery have her brain cyst removed at just five weeks.

Unfortunately complications developed with the cyst and she developed bacterial meningitis.

“We immediately knew that Avery should be seen by a pediatric neurosurgeon at Children’s Hospital of Michigan for follow up care and have never looked back,” says Ann. “Despite six brain surgeries we knew she was in the best hands with Dr. Sood.”

Avery was seen by Sandeep Sood, M.D., neurosurgeon on staff at Children’s Hospital of Michigan. 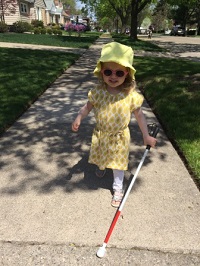 Although Avery’s long term prognosis regarding her eye sight is unknown, Ann is thrilled that Avery is seeing better than she ever expected.

The expectation was that she may only see shapes and shadows. Avery is now four years old and has 20:400 vision. She does not have depth perception or peripheral vision but she is able to get around great in her home and uses a white cane for assistance in unfamiliar places.

With time, additional surgery may also help with her peripheral vision.

“Avery is a wonderful child who is very friendly, loves to dance and really likes bright things. We are so grateful to all of the doctors, nurses and specialists who have taken care of Avery at Children’s Hospital of Michigan. When you have a child with a chronic medical condition, there is absolutely nothing more important than knowing you are in the best hospital for their care,” says Ann.