Marissa of Clinton Township, Michigan has made her parents proud as an excellent student with a passion for playing the Clarinet in her high school band. 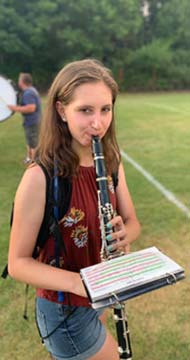 Over the years, the 17-year-old musician had complained of headaches. Her parents David and Kimberly were not initially concerned with the headaches, but they knew it was time to seek medical care when her symptoms progressed significantly in the past couple of years.

“She was getting to the point where she was throwing up every day and would wake up in the morning alternating between taking Advil and Tylenol to manage her symptoms because if the headaches were not prevented, it would get progressively worse,” David says.

Marissa was evaluated by a local physician who became concerned. In addition to her headaches and vomiting, she also had a rapid heart rate. David and Kimberly decided that Marissa should be evaluated by a specialist.

Marissa was then seen by Neena Marupudi, MD, pediatric neurosurgeon at the Children’s Hospital of Michigan. Testing revealed that Marissa had Chiari malformation, a condition in which brain tissue extends into the spinal canal. The condition can cause pressure from the cerebellum on the spinal cord or lower brainstem which can cause neurological issues including headaches, neck pain, dizziness, heart rhythm issues, swallowing problems and scoliosis.

David explains that Marissa was set to perform with her band at Mackinaw Island but her symptoms, including headache and nausea, were severely affecting her ability to perform. On their way back from her performance, David and Kimberly received the diagnosis.

To their surprise, when Dr. Marupudi explained the surgical option, Marissa didn’t think twice about it. She wanted to do everything she could to alleviate her condition even though it was not guaranteed it would work. She was also relieved that she finally knew what was causing her debilitating symptoms.

Dr. Marupudi explains that the surgical procedure performed on Marissa is called suboccipital decompression, which creates more space for the cerebellum and relieves pressure on the brainstem and upper spinal cord. The surgery involves making an incision at the back of the head to remove a small piece of bone at the bottom of the skull.

In some cases, like Marissa’s, the protective covering of the brain called the dura needs to be opened to cauterize the crowded cerebellar tonsils and create more space. Because the cerebellar tonsils have no recognized function, they can be removed without causing any neurological problems. A dural patch is also sewn in to expand the space around the tonsils, much like letting out the waistband on a pair of pants. The surgery helps restore normal flow of the cerebrospinal flow in an effort to relieve symptoms.

“Marissa has recovered beautifully. Although I had cautioned that this surgery does not always relieve underlying headaches, her symptoms were confirmed to be a direct result of the constricted space at her skull base. Prior to surgery, Marissa could not play her clarinet because blowing into the instrument increased the pressure in her head, due to the obstruction, and caused her headaches. After surgery, Marissa has had complete resolution of her nausea, vomiting, and headaches. She is now also able to play her clarinet without causing pain,” says Dr. Marupudi.

David says they did not know this at the time but one of the triggers for Marissa's crushing headaches was playing the clarinet in the school band. It's one of those things that got worse over time, but since playing in the band was her social universe, it was especially hard for her.

“Since surgery, those symptoms are all but gone! Her recovery, although initially painful, has been dramatic and she was able to play again in her high school band after only about one month after surgery. We are all so grateful to Dr. Marupudi and the nurses and staff who helped Marissa. This has impacted her so greatly that she is now looking at colleges and hopes to pursue becoming a nurse or physician assistant,” says David.

For further information on brain and spinal conditions visit pediatric neurology-neurosurgery at Children’s Hospital of Michigan.