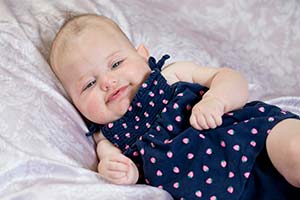 After developing preeclampsia, Keenan and her husband Paul of Waterford, welcomed their daughter Elliana, “Ellie”, a little short of 35 weeks gestation, weighing 4 pounds 7 ounces. Ellie spent three weeks at a local neonatal intensive care unit (NICU) and was discharged home once she was able to nipple her bottles adequately.

Within a week of being home Keenan, a nurse at a local hospital, noticed that Ellie had rhythmic eye movements to her right side and videotaped it for her pediatrician to see.

“We were told to take her to the emergency room where she was readmitted and accepted back into the NICU. An MRI revealed that Ellie had hemimegalencephaly on the left side of her brain,” she says.

Hemimegalencephaly is a rare malformation involving one side of the brain. Children affected by this disorder may have a large, asymmetrical head. The enlarged brain tissue causes frequent seizures, often leading to cognitive or behavioral disabilities.

Testing revealed that Ellie was having up to 5 to 8 seizures per hour. She was put on five anti-seizure medications and a ketogenic diet but her seizures continued.

Keenan explains that at Ellie’s weight of 8 pounds, the risk of surgery was high and recommendation from local doctors was to continue to try to manage her seizures for approximately one year so that she would be bigger and could tolerate the traditional crainiotomy based hemispherotomy surgery, a procedure that disconnects the cortex (or outer layer) of one half of the brain(or hemisphere) from the other without removing it to treat the seizures. Ellie was not feeding well and had poor weight gain while on the ketogenic diet and as a result there was even a talk about putting in a feeding tube. Ellie’s parents felt that prolonged seizures could result in poorer developmental outcomes long term.

Paul and Keenan met with Dr. Sood, who provided them with hope and an alternative to the traditional epilepsy surgery. Dr. Sood is a pioneer in minimally invasive endoscopic hemispherotomy which was developed and implemented at the Children’s Hospital of Michigan. He felt confident that the minimally invasive endoscopic hemispherotomy was the best option for Ellie.

“Our heads and our hearts told us that the minimally invasive option performed by Dr. Sood was the right decision,” says Paul, a business consultant.

“Our level of comfort was high after we met with Dr. Sood and were informed of his experience with minimally invasive endoscopic hemispherotomy that the other doctors in the area did not have. He was extremely confident and concerned about the best outcome for Ellie. Although both traditional surgery and the minimally invasive option carry risks, we felt that it was in Ellie’s best interest to proceed with the minimally invasive option sooner rather than later to avoid the continuous seizures and the potential developmental impact it could have on her,” Paul adds.

Dr. Asano explains that before the surgery the multidisciplinary epilepsy management team evaluated Elliana’s seizure activity using video-EEG monitoring to confirm what part of the brain the seizures were generating from. EEG showed that all seizures arose from the left hemisphere of the brain, whereas some seizure discharges propagated to the right hemisphere which appeared to be healthy on MRI.

“We recognized the urgent need of protection of the healthy brain from seizure discharges. We concluded that surgical disconnection of the seizure focus would provide the best chance to facilitate her cognitive development,” says Dr. Asano. 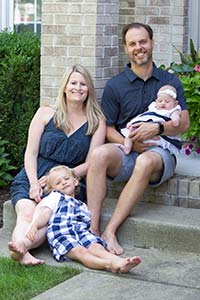 Dr. Sood who along with his colleagues has published extensively on endoscopy-based epilepsy surgery including Journal of Neurosurgery Pediatrics, Epilepsia, and Child Nervous System, says, “Review of literature showed that at 8 pounds Elliana is believed to be the world’s smallest infant to have the hemispherotomy procedure”.

“Neonates and infants cannot tolerate a blood loss of 200-300 ml which occurs during a standard open hemispherectomy, however, with minimally invasive endoscopic assisted hemispherotomy, a smaller incision and selective coagulation of deeper blood vessels helps reduce the blood loss to less than 100 ml, making it a safe and attractive option. Elliana woke up right after surgery and started feeding within a few days,” says Dr. Sood.

Keenan is happy to report that after only a few months of having the procedure done, Ellie is progressing beautifully.

“She is undergoing outpatient occupational and physical therapy and she receives Early On services through the local school district as well. Ellie’s therapists are very happy with her progress thus far. Vision issues are also often associated with the procedure but so far Ellie is able to track items to her left and right equally with no obvious gaze preference. Ellie’s ophthalmologist also said that early indications suggest that her eyes appear healthy. Ellie is such a happy baby, she’s always smiling and giggling, and overall very engaged with her environment and we could not be more thrilled at how well she is doing,” she says.

Dr. Luat, who is managing Ellie’s care after surgery says she is showing signs of healthy development including cooing, smiling, and sitting up despite the mild weakness of her right hand. She is currently on two anti-seizure medications, and in the process of gradual reduction of the dose of one of the medications.

Paul and Keenan would like to express their gratitude to the epilepsy team, including Dr. Sood, Dr. Asano, Dr. Luat and the nursing and support staff.

“The level of dedication from the whole team is impressive. Communication is of the utmost importance, especially when dealing with such a complex condition and when we have questions we typically send emails and have very well thought out and thorough responses within hours. Ellie truly is a miracle and we are so thankful to be able to share our story. We hope that by sharing this story it can help other families with young infants with this condition that may otherwise not have known surgery was an option so early,” says Paul.