Football player back in the game after successful surgery

Jason Carter Jr. is quite the athlete playing basketball and football for Martin Luther King Jr. High School in Detroit. So when he did not go to one of his football practices because of a severe headache, his dad Jason Carter Sr. was concerned something was up. 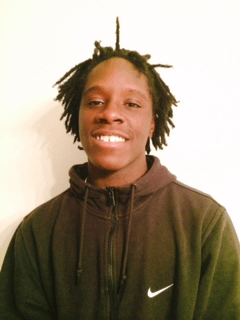 A couple of physicals in previous years showed Jason Jr. had elevated blood pressure which doctors agreed was unusual for his age. The blood pressure fluctuated and didn’t cause any major problems. Testing was also inconclusive.

“I decided to take him to the hospital when his headaches became severe and his eyes were red,” says Mr. Carter.

This MRI revealed that Jason Jr. had a pheochromocytoma, a rare tumor in his adrenal gland. The condition causes the release of too much epinephrine and norepinephrine, hormones that control heart rate, metabolism, and blood pressure. Common symptoms include severe headache and high blood pressure which Jason Jr. experienced as well as other symptoms such as abdominal and chest pain, sweating and weight loss.

The definitive correction for this condition is surgery, but surgery for this type of tumor is anything but routine. Dangerously high blood pressures can occur at the time of the surgical removal of the tumor if the patient is not carefully managed prior to this operation.

“His surgery was done through one small incision at the belly button. We believe this may be one of the first single port adrenalectomies done on a child for this condition. The small incision offers the patient benefits such as faster recovery, decreased postoperative scarring and better cosmetic effect,” says Dr. Langenburg.

“We are so thankful to all the staff at Children’s Hospital of Michigan including Dr. James Collins, his primary care physician, Dr. Rudolph Valentini, his nephrologist and Dr. Scott Langenburg who performed his surgery. We don’t even notice the scar from the surgery but the treatment worked great and Jason is now looking forward to continuing high school while already entertaining offers from various colleges to play football,” says Mr. Carter.