Skip to main content and our Accessibility Statement may be found in the footer of our website.
Back To Pulmonary Stories
{{CTAButtonText}} 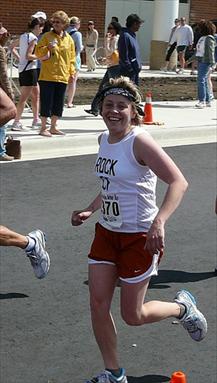 When you hear about Emily Schaller, the word inspiration will almost certainly come to mind, yet most who know her would probably agree that word is an understatement for this remarkable young woman.

Emily was born with Cystic Fibrosis (CF) 27 years ago and spent about 25 of those years seeking treatment at Children’s Hospital of Michigan. Perhaps because she didn’t know any better, she never used the condition to get in her way of achieving so many of her dreams.

“When I was at Children’s and needed treatment at the Cystic Fibrosis Clinic, the staff would do everything possible to work around my schedule whether it was playing drums in my band or going to school, so that I could lead as normal a life as possible,” she says.

Emily may be thankful for the care she received at Children’s but the staff has been equally thankful to her for her boundless energy and optimism. “She is truly my hero and an inspiration to me everyday in providing the best care I can to the CF patients and families here at Children’s,” says Deborah Hachey, RN, Cystic Fibrosis Nurse Coordinator. Deborah and Dr. Ibrahim Abdulhamid, director of Pulmonary Medicine, add that Emily approaches the management of her disease with the same tenacity that she devotes to raising CF awareness.

Cystic Fibrosis, which is the leading genetic killer of children and adults, causes thick mucus to build up inside the body and block vital organs like the lungs and pancreas from functioning properly. Despite taking 40 pills per day and extensive breathing treatments, to combat this life-threatening condition, Emily has kept a schedule many people couldn’t keep up with. She worked several years as a wholesale manager for Pure Detroit while pursuing her musical interest as a drummer in a rock band and raising money for Cystic Fibrosis research.

In 2007, she launched her own foundation, Rock CF Foundation, which raises funds to support research and increase awareness of Cystic Fibrosis, through her interests in the arts, entertainments, fashion and fitness. To date, she has raised more than $150,000.

Emily began extensive exercise training in 2007. Some people may find it surprising that she is able to do 1-2 hours of running, biking and strength conditioning six days per week, yet Emily credits exercise, with not only a great avenue to pursue her fundraising but with improving her overall condition.

“I used to check into the hospital 2-3 times per year for routine treatment for CF and since I have started exercising, it’s been reduced to once a year.”

Emily has run in two half marathons and biked over 1,000 miles including riding about 300 miles from Detroit to Chicago to keep healthy and raise funds for Rock CF. As a drummer for a rock band, Emily has also raised more than $60,000 at her annual “Just Let Me Breathe” (JLMB) rock ‘n roll benefit concert.

“The great news for any child who has CF is that thanks to advanced research, the outlook to manage CF has never been greater.” When Emily was born, the average life expectancy for someone with the disease was 16 or 17. Today it is closer to 37. Emily believes with new medications on the horizon, patients may soon be able to live to be grandparents.

“I have told people that my goal is to keep pushing the life expectancy back, so one day CF stands not for cystic fibrosis, but for “cure found.”

Because a key to achieving that goal is to raise money to support research, Emily is now focusing her efforts to expand the foundation to raise the funds needed to achieve breakthrough treatment.

One of her key goals in raising awareness for Cystic Fibrosis and her foundation is to appear on the Ellen Degeneres Show and meet her hero. “The staff at Children’s always used to encourage me to get on that show.” Perhaps to help matters further, Emily bears a striking resemblance to Ellen and is consistently approached by people commenting on her similar resemblance.

With support from her father and uncle who will be driving from Detroit to Burbank to help house her bike, new Vespa and treatment to manage her disease, Emily hopes to reach the Burbank studios in California to appear on Ellen in October of 2009.

Whether she is riding, running or dancing her way to California, thousands of people will be cheering her on to make her latest dream a reality.

Need a doctor for your child's care?
Request a Pulmonologist Referral