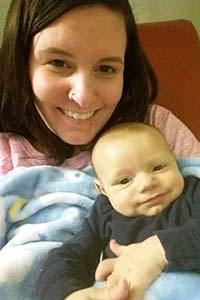 In August of 2015, Heather Hillyer, of Wayland, Michigan, a small town close to Grand Rapids, welcomed her son Jaxson Hillyer into the world. A few weeks after his birth, Heather noticed his skin was turning yellow. After taking Jaxson to the local hospital, the news was not good.

Jaxson was born with Biliary Atresia and Alpha One Antitrysin Deficiency, which means his bile ducts were not working and his liver was failing rapidly. Heather was told a liver transplant would be needed.

“When you hear that your child needs a liver transplant it’s like someone punched you in the chest,” recalls Heather.

Local doctors recommended that Jaxson be referred to the Children’s Hospital of Michigan Pediatric Liver Disease and Transplant Program, one of only two such programs in the state of Michigan.

Heather met with Najeeb F. Zoubi, M.D., medical director and program director,Pediatric Liver Disease and Transplant Program at the Children’s Hospital of Michigan who would be managing Jaxson’s care.

“When I first met Dr. Zoubi, I liked him immediately. I was so nervous with Jaxson’s first appointment and felt like I was having a panic attack. Dr. Zoubi said ‘you need to hear this you need to know what’s going on’. This is the first time a doctor said that to me and I needed to hear that to take better care of Jaxson,” says Heather.

Dr. Zoubi, says while Jackson was waiting for the liver transplant, his condition was deteriorating.

“Just like other patients with his condition, these kids will get sick. He was losing weight, turning more yellow, had fluid collection inside his abdomen and required tube feedings to gain weight. If he didn’t get a liver transplant he would have died,” says Dr. Zoubi.

“When I met Jaxson he was very tiny and our goal was to get him to grow because from a technical standpoint the risk of complications is higher for tinier babies,” says Dr. Collins.

To prepare for the liver transplant, the Children’s Hospital of Michigan DMC has a multidisciplinary team that includes more than 20 pediatric medical, surgical, nursing and support specialists including a team to procure the organ safely.

Just three months after being on the transplant list, a liver became available. 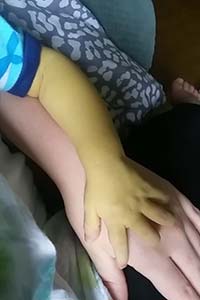 “When I heard that an organ was available I didn’t feel that it was real. It was fear, happiness every emotion you can think of. Within 15 minutes of getting the call, we were on our way to the hospital and Jaxson was in surgery by midnight that night,” says Heather.

“He was yellow, almost green because of jaundice. But within a few hours after the liver transplant we were surprised to see his color began getting back to normal. He recovered very nicely and we could see the real Jaxson, the very happy Jaxson,” says Dr. Zoubi.

Heather is happy to say that after his transplant he was like a very different baby.

“To look at him now I feel like he knows he’s better and nothing will get in his way,” she says.

“I love the doctors and nurses and everyone we came across at the Children’s Hospital of Michigan. I feel like the transplant team was like our family. We don’t know anything about our donor family but I am so thankful to the family because of their selfless decision, it saved my son’s life,” she adds.

According to the Organ Procurement & Transplantation Network (OPTN) as of April 11, 2018, there are 114,845 people on the waiting list for a lifesaving organ transplant. Of those waiting, 1,984 are pediatric candidates aged 17 or younger and every 10 minutes someone is added to the national transplant waiting list. For further information on registering for organ donation visit www.giftoflifemichigan.org.