Skip to main content and our Accessibility Statement may be found in the footer of our website.

What is a corpus callosotomy?

How is corpus callosotomy surgery performed?

Corpus callosotomy surgery is performed while your child is under general anesthesia.

Two methods are used for the procedure.

What are some of the benefits of a laser ablation brain surgery? 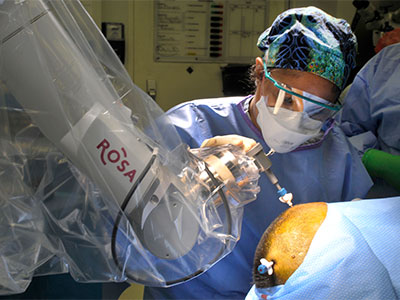 ROSA is a surgical navigation and positioning system using robotic technology that allows surgeons to place instruments in the brain without having to open a patient’s skull or even shave a patient’s head, as other traditional methods require.

The ROSA system is used to support many neurosurgical procedures, including stereoelectroencephalography (SEEG), thermal ablation of seizure foci or tumors, deep brain stimulation (DBS) and surgical treatment of movement disorders.

The surgeon uses ROSA and its planning software to create a 3D map of the patient’s brain and plan out exact pathways needed to carry out the procedure. ROSA Brain is aligned to the trajectories outlined by the surgical plan, and the surgeon carries out the surgery utilizing the robot as a guide. ROSA Brain provides robotic alignment of the planned pathway which allows the surgeon to reach a deep brain target for the placement of surgical instruments.